Math via The New York Times 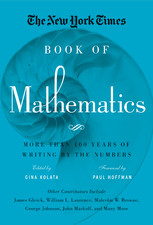 Non-technical math anthologies are rare critters… when one comes along my instinct is to pounce on it. "The New York Times Book of Mathematics," edited by Gina Kolata, was worth the pounce!

This volume covers a wide and interesting array of topics. Here are the 7 chapter headings (though they don't fully hint at the range of material touched on):

3) Famous Problems, Solved and As Yet Unsolved

5) Cryptography and the Emergence of Truly Unbreakable Codes

6) Computers Enter the World of Mathematics

7) Mathematicians and Their World

That should give you a sense of the breadth of topics on display here. The pieces are vibrant, terse treatments (no doubt only intended to fit within a certain column length). The writing is so good that the pithiness leaves one reaching the end of most pieces wanting more... just one more page pl-e-e-ease.

I think Gina Kolata sets the tone and 'feel' of this engaging volume very aptly when she writes in her Introduction:


"A mathematician once dismissed the very idea that people outside his circle could ever understand the true essence of the field. Mathematics is an art form, like music or painting. Translating math into the English language, he said, is harder than translating Chinese poetry. The beauty is lost, the elegance, and a proof that is a thing of ineffable iridescence becomes reduced to a baffling or mundane-sounding bottom line....

"But even if the rest of us cannot appreciate mathematics as an art form, are we really shut out? Articles in the New York Times may not give the details of proofs, but they reveal a rich world that can be exciting, surprising, and can even tug at the heartstrings."

Yet several reviews I've seen of the volume are rather ho-hum about it, but these are usually from professional mathematicians -- for the working mathematician there may not be that much here to excite -- although I think any math lover will find at least a few pieces that strike a chord. But for lay folks with an interest in math (my core readership!!) this may be the BEST anthology I've ever come across! There is no technical material or equations to weigh down your enjoyment, nor slow your consumption. It is all about math and mathematicians... without doing math.

One downside is that because this is limited to NY Times' writers, many excellent popular math writers are absent.  Indeed, I'd normally be skeptical of an "anthology" that was restricted to the number of writers this one is -- it is very heavy on pieces from Gina Kolata and James Gleick -- but these writers are SO good at their craft that skepticism quickly fades away. While Kolata and Gleick's pieces are perhaps the best, there are numerous fine contributions as well from George Johnson, John Markoff, Dennis Overbye, and others. Oddly, there are no entries from Steven Strogatz here (author of some of the most popular math pieces the Times has carried in recent years), but perhaps his offerings simply didn't make the 2010 cutoff for the volume. The one other thing that may be missing from the collection, it seems to me, are more articles which relate math to the other sciences, particularly physics and biology (I believe the Times has run several such pieces).

Most of the entries come from the last 3 decades or so, but some go back as far as the late 1800s. I wasn't particularly enamored of several of the older entries that were probably included more for the sense of history or progression they illustrate than for the math covered. Still, overall the mix is appealing.

Chapter 5, focusing on cryptography, would have been interesting in its own right, but became even more-so, in light of current events, as almost every article makes mention of the NSA and its relationship with mathematicians (by most accounts, by the way, NSA is the largest employer of mathematicians in the world). But there isn't a bad chapter in the volume.

In short, I love this compendium, even more than I expected to. If it wasn't such a thick, heavy volume I would almost recommend it, at this time of year, as a 'beach-read'… for the mathematically-inclined. In the distressed world of print journalism, the NY Times has been cutting back on science journalism, so it is wonderful to have this hard-copy of delicious math-related essays to keep on one's shelf as a permanent source of popular math writing stretching across decades. Hats off to Ms. Kolata on a job well-done!