"Moving from the concrete to the abstract, from problems of everyday language to straightforward philosophical questions to the formalities of physics and mathematics, Yanofsky demonstrates a myriad of unsolvable problems and paradoxes. Exploring the various limitations of our knowledge, he shows that many of these limitations have a similar pattern and that by investigating these patterns, we can better understand the structure and limitations of reason itself."  -- MIT Press 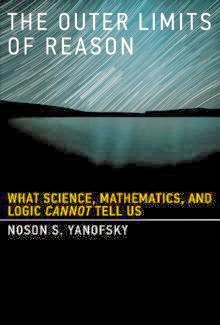 In 1979, like a lot of people, I picked up a book entitled "Gödel, Escher, Bach" by an unknown author named Douglas Hofstadter... and was blown away. The book was easily one of the most creative, thought-provoking I'd ever encountered; over the years it became internationally famous (often simply referred to as "GEB") as did its author who won a Pulitzer and National Book Award his first time out-of-the-gate. (Interestingly, years later, Hofstadter would write that almost all reviewers and discussers of GEB miconstrued his own goals with the book -- people often read into it whatever they wanted -- but nonetheless it remains a keen treatise on human cognition, and Hofstadter has written several volumes since. [p.s. -- I recently discovered a great 1982 read (pdf) from Hofstadter on self-reference and Gödel theory HERE.]

34 years later I've finally been bowled over by another book… not as creative, ground-breaking, or Rorschach-like as Hofstadter's effort, but still a vitally important, rich read, and the author, not surprisingly, is also a Hofstadter fan.
A brief look at:

"The Outer Limits of Reason"  by Noson Yanofsky

Before picking up this book I'd not heard of "Noson Yanofsky," so I was astounded that this is the best, most lucidly-written volume for lay readers I've ever encountered on the underlying or foundational topics I most enjoy, related to mathematics; including issues that cross the boundaries of math, logic, philosophy, physics, and computer science.

In terse summary:
After an introductory chapter, Chapter 2 delves into "language paradoxes" and self-reference (a topic that runs throughout the volume), including the Berry Paradox, Richards Paradox, and the 'interesting-number paradox,' in addition to even more common ones. Chapter 3 moves on to "philosophical conundrums," followed by "infinity" in Chapter 4. Chapters 5 and 6 delve into a range of computer science issues. Chapter 7, the longest and perhaps most difficult one (50+ pages), covers "scientific limitations," including quantum mechanics and multiverse ideas. This is followed, in turn, by chapters on "metascientific perplexities," "mathematical obstructions," and a final wrap-up chapter on "reason" and its limits.

More specifically, all the following topics (and more) are brought into focus in this volume:

The writing is clear, interesting, and comprehensible, covering a lot of ground, without proceeding to such advanced elements as to throttle the reader along the way (the editor has done a fantastic job!). The book ends with 15 pages of excellent "notes" to the individual chapters, and a dozen pages of good bibliographical references (each chapter ends with suggestions for further reading as well).

One Amazon reviewer wrote "Reading this book could be a mini education!" and that captures my own feeling as well.
Having said all this I should note that the typical mathematician won't learn any new math here; a typical physicist won't learn any new physics, and a philosopher won't find new philosophy here... Rather, what is wonderful and well-crafted (and rare) is the weaving together of all these (and more) areas into a single tapestry on the nature of human rationality across such fields -- something I believe all students should have exposure too. To some degree most of the chapters are self-contained units that can almost be read in any order and be enjoyed, but reading from beginning to end is likely the best way to appreciate Yanofsky's progression of thought and complexity, as he puts it "from concrete to abstract."

The book's subtitle is, "What Science, Mathematics, and Logic Cannot Tell Us" and that is the central, important theme of this offering: that despite the success that science, math, and logic meet in providing us with information, there exist "truths" or information which are not only very difficult to gather, but which are inherently beyond our capacity to attain.

"Certainty," and the hubris that often follows it, is one of the most perilous dispositions humans can have… especially so in politics, religion, and other arenas of culture… but even within science, where empirical evidence reigns supreme, there are real limits to certainty and knowledge that need to be recognized -- I know of no more important science lesson a book can pass along, and I know of no book that does it as well as this one!

And in the blog-post just prior to this one I interviewed Dr. Yanofsky.