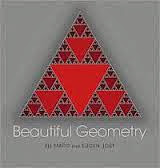 I'll confess to not being a big fan of coffee-table books; pictures of animals and exotic places are okay and appreciated in certain contexts, but outside of those two subjects, I'm usually not much enamored of large picture books collecting dust on a tabletop as a snooty bit of decor. And that goes double for math and science books pretending to be table-toppers… I want to read and ponder math and science, more than I want to stare at pretty pictures, so I'm always a bit skeptical of coffee-table-like books that approach these subjects... and appropriately such books are a bit rare.

Having said all that, I have another confession to make: I'm a sucker for geometry!! ...My initial thought when I first glanced at the new volume "Beautiful Geometry" was, "oh good a new Alfred Posamentier book!"… but it isn't from Dr. Posamentier; it is from Eli Maor (and artwork by Eugen Jost), another fabulous math-popularist. And if I owned a coffee table (I don't) this is a volume I'd be very pleased to plop upon it! Princeton University Press has done its usual splendid job of presentation with this large striking offering of indeed beautiful geometry (beginning with the gorgeously-rendered cover of a Sierpinski triangle -- which, though you might not recognize it from that cover, is characterized by the delightful fractal paradox of having an infinite perimeter bounding an area of zero!).

I could be mistaken, but it seems as if the wide popularity of Clifford Pickover's "The Math Book" has spawned a mini-proliferation of these sorts of artsy-math compilations, that combine math text with eye-catching art and graphics. The artwork in this volume is consistently exquisite -- sometimes its meaning being clear and obvious, and other times requiring closer examination or pondering. Maor's text is excellent (and very accessible) as well, and does raise the volume above the level of a mere look-see coffee table book -- you can definitely learn some interesting and real math along the way, which is beautiful in its own way, apart from the artwork.

Although the topics covered (over 50 gems) run mostly in chronological order, you can easily hopscotch around the volume jumping to topics which interest you most, or which are new to you. Of course there are many classic bits of plane geometry included here, but also some subjects that might be less familiar to many readers, like "Ceva's theorem," "Steiner's prism," "Lissajous figures," and the "Reuleaux triangle."
It's not often that math books can be described as "delicious," "scrumptious," or "delectable," but such words fit in this case, or, as Ian Stewart calls it, "a feast for the eyes."
Mind you, you're average neighbor who stops by for a beer on Sunday afternoon may not be much moved by these pages, but for math enthusiasts and especially young people delving into geometry this is A BUY! Geometry has, perhaps, never been rendered more beautifully!

From indications I've seen, it looks like another banner year ahead for popular math books (this particular volume is scheduled to hit bookstores around end-of-January)… I can't imagine it can equal 2013, but there's some great stuff coming down the pike (the one I'm currently most anticipating is Max Tegmark's "Our Mathematical Universe" due out in a couple weeks). Yeah, I'm already likin' the looks of 2014!
So a Happy New Year to all!!, as MathTango, which started as an experimental offshoot of Math-Frolic, essentially completes it's first year of postings.