Keith Devlin Explains MY Past (maybe) 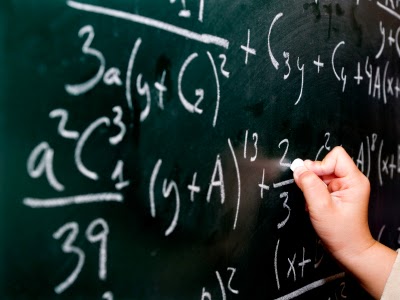 The debate over what content to teach in math and how to teach it seems to go on forever (as did the first draft of this post!)….

First off, I'll mention that Richard Feynman famously had his own outspoken views on science school textbooks, which he covered in a chapter of one of his books, reprinted here:

It's a long (but entertaining) read so I'd wait and come back to it at the end, but I do think it's a must-read if you've not heard him address the subject before.

Recently, Keith Devlin, among others, posted a number of tweets about math education. I'll offer just two of those from Dr. Devlin that seem to capture the essence of what he is arguing (and has publicly said for quite awhile):

"I would not say math is a skill. It requires skills to do it. But it's really a way of knowing/thinking/acting."

"Mastery of arithmetic was REALLY important until around 1955. No longer so. Math thinking is important now."

Sounds simple, but this is very very deep stuff in my opinion, not easily comprehended by most… and certainly debated by many (as tweets from others often indicate).
For a fuller take on Dr. Devlin's viewpoint see this older post of his that got a lot of buzz:

I've gradually moved toward Dr. Devlin's view partly in sheer deference to his long-time work and knowledge in this arena… but also for another reason as well: It may finally account for my own math experience:

For 40 years I couldn't understand my failure to succeed as a math major in college, having loved math from a young age, and early on professing a desire to be a mathematician (or astrophysicist). I did excellently from primary school through high school (scoring 800 on the math SAT!), yet hit a brick wall in college. There were some practical reasons involved which I won't cover, but essentially, for decades, I've pondered, with no resolution, why my youthful number talents didn't carry me through.
After 40 years of puzzlement, Dr. Devlin's perspective finally offers some clue. Keith has long contended that primary/secondary mathematics is a completely different animal from college-level mathematics, so it isn't that unusual for someone to breeze through the former (which simply require a certain skill set), but get stuck on the latter, which requires a deeper, more abstract understanding.

As a teenager I remember working on this problem assiduously until someone showed me the "10-second" face-palm solution. I wonder now if problems like these are Rorschach tests separating those who truly think more mathematically from those who, like me, thought more computationally or mechanically??? Or perhaps it relates back to what Edward de Bono famously termed "lateral thinking" (sort of 'outside-the-box') versus the more common "vertical thinking." I'm not sure…
Anyway, this distinction between mathematical skills and more abstract mathematical thinking, intrigues me. So I sent Dr. Devlin a few questions to flesh out a little more of his thinking, and he responded [I've added some bold]:

1)  You've written that "mastery of arithmetic was REALLY important until around 1955" but now "math thinking" is what's important. Do you recall when and what brought you to that distinction? And was it an epiphany of sorts for you, or more a gradual change of view over time with evolving technology?

Keith:  The reality is that what I now deliberately refer to as “mathematical thinking” is what I (and all creative mathematicians) have always understood by “mathematics”. I learned over many years of writing for, and interacting with, non-mathematicians (including my daughters’ mathematics teachers) that many non-mathematicians understood the word to mean something very different. It was probably reading Jo Boaler’s work, which I wrote about in my MAA blog in 2010 (http://www.maa.org/external_archive/devlin/devlin_06_10.html), that finally persuaded me to start using the term “mathematical thinking”. The real meaning of “mathematics” had been lost in the public mind. As Boaler’s research showed, popular impression was that mathematics is a collection of mindLESS techniques, and has nothing to do with reality.

My views on just how much mathematics had fallen victim to a “Reality Distortion Field” were driven home for me when I tried to secure NSF funding for a radically different video game concept I had developed (with good video game designers!) that embedded deep and challenging mathematics. We were turned down after one reviewer (that’s all it takes) said there was "not enough mathematical meat” in the game. The first game built on those ideas, Wuzzit Trouble, which the reviewer experienced in prototype form, is now out, built with private investment, and I suspect that reviewer is finding it mathematically challenging. I know of no other game (and I have played many) that requires greater deep mathematical thinking (i.e., “mathematics” problem solving). It just does not fill the screen with symbolic equations. (See http://www.americanscientist.org/issues/pub/the-music-of-math-games for a discussion of the design principles.) And guess what, people love it.

After that experience, I finally had to admit that the only possible answer to the provision of good education in this country is by private enterprise. The state system is a century out of date and broken beyond repair.

(BTW, that phrase “Reality Distortion Field” I just used? Apple employees used to use it to describe Steve Jobs' visions — you know, the ones that became the Macintosh, Pixar, iTunes, the iPhone, the iPad. What Jobs showed was that you see distortion from both sides. You just have to figure out which side is reality — and then make it so!)

[WOW!, interesting, and discouraging :-( to hear Keith say that public education is "broken beyond repair" and to surmise that only "private enterprise" can provide good education -- I hear his frustration, but hope he's ultimately wrong about that.]

2)  When you first started making this distinction, and new emphasis on "mathematical thinking," did you feel at all like a lone wolf crying in the wilderness? And who would you now point to as other writers/educators worth reading who share/espouse your emphasis?

Keith:  To some extent maybe I was a lone wolf at the start. But not for long. At the schools level, Dan Meyer came along and shook up the math ed world with one 15 minutes TED talk, and at university level Ed Frenkel has come storming in. None of us is unique in these views, but we have bigger media pulpits than most others who say the same thing.

3)  To what degree (if any) is the distinction you're drawing between "skills" and "thinking" applicable to other scientific fields beyond mathematics… physics, biology, chemistry, computer science…?

Keith:  It applies to all of those fields. The US is not alone, but definitely leads the way, in having an education system that takes learning — something evolution hard-wired into us as an instinctive activity that gives us pleasure (the dopamine fix) — and turns it into a test-driven drudgery.

In the 19th Century, when our K-12 education system was being developed, being a well-trained, rule-following drone was the key to lifetime security by way of a job-for-life.

But today’s world is very, very different -- as millions of out-of-work well-educated people will attest. But our education system is still a century behind. Our political leaders, who maintain this status quo, are either ignorant or else have a vested interest in keeping as many people on the bottom rung of society's ladder as possible. (Both may apply.)

Dr. Devlin has an ongoing MOOC course covering all this. I'm sure out of the 1000s who sign up for his course each go-around many MISconceive what the course will be about and drop out disenchanted, so different is "mathematical thinking" from most peoples' idea of math (and Dr. Devlin does explain ahead-of-time what the course will and won't entail) -- p.s. high percentages drop out of most MOOCs.

The so-called "New Math" of the 1960s (which I experienced, much to my dismay) was a short-lived failed experiment in math education that most here know about. Sometimes parts of Common Core, or the sort of learning Dr. Devlin encourages, get referred to scornfully as the "new New Math." The original New Math was of course perfectly valid mathematics, but was often critiqued as being inappropriately targeted at youngsters not cognitively ready for it. Of course, cognitive styles, even of young children, may be highly variable -- indeed, I believe they're more variable than perhaps recognized. And once again that seems to be a central issue in the current debates... what are different age groups really prepared for in the way of content? Is it even possible to generalize? Another recent article (via The Atlantic) on the success of Maria Droujkova's "Natural Math" for youngsters, indicates what children are capable of.  Perhaps the real problem with most math reforms has less to do with children's abilities, than with a failure to adequately train their teachers in the new approaches. I don't pretend to know...?

There's so much more out there on this topic, but I don't wish to drag this post out, so will just leave you with some additional links which offer varying perspectives (...if you've read this far you're likely already aware of most of this!), but again I'd start with Richard Feynman, because, well, anytime you can begin with Feynman, that ain't a bad way to start!

The perspective of an expatriate math tutor:
http://expattutor.wordpress.com/2013/09/05/the-new-math-part-i-why-we-have-it/

And in addition to Dr. Devlin's piece that I started with, he has MANY other Web-accessible discussions of math education, thinking, etc.. Here are three:

And if you're on Twitter, and interested in these sorts of issues, the #mathed and #mathchat hashtags are sources of ideas/debates from many thoughtful folks.