Now for something completely different (for MathTango)…

I've written before how much I admire Cathy O'Neil's keen ability to touch on varying topics over at her blog. Despite coming from a mathematics academic background and titling her blog "Mathbabe," Cathy writes on a wide range of topics that rattle around in her head. So I'll sorta take that cue today to veer off and relate an odd, completely NON-mathy episode from my weekend…

I tweet under some different accounts, but lay low on Twitter, and neither expect nor have many of my tweets re-tweeted.  Saturday I posted a simple tweet linking to someone else's tweet about Robin Williams, which I thought was interesting, then went on about my way.... 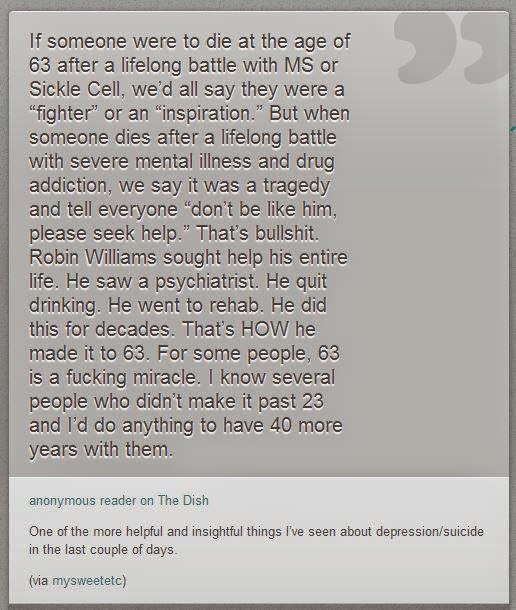 When I returned five hours later, the tweet, to my astonishment, had taken on an incredible life of its own. By the following day the response blew me away! (eventually almost 6000 retweets). Clearly, Robin Williams is beloved, and concern over mental health issues touch a nerve for lots of folks in this country!  Most people seemed positive about the passage above, and quite sure of what it said (often, the response was along the lines of, 'YES! this needs to be said more often').

SO, here's the weird thing! -- I wasn't at all sure in my own mind, what exactly the above anonymous poster was trying to say!? I just thought it was an interesting take, but with two completely opposite interpretations possible, so am asking now for any clarification anyone may choose to offer.
Here were my two interpretations:

1) on the first quick read I thought the individual was noting how weak and inadequate our mental health system is, because here was Robin Williams, who did everything right (accessing the system) and yet stiiiiill killed himself at age 63.

BUT, upon further readings (and some of the Twitter comments) I concluded, that actually the writer was saying, just the opposite:

2) that this is an instance where the system DID WORK, because Robin DID access the system, got help, and we had him around, as a highly successful, productive individual, for decades longer than we might have IF the system had failed.

In short, I think the writer is saying that despite how things look and feel, Robin's case is more a success story than a tragedy, and needs to be viewed that way… BUT, I'm still not completely certain!??? (or maybe there's a more-nuanced in-between interpretation?).
(I should quickly add that another clearer, less ambiguous message the writer conveys is that mental illness still unfortunately carries a stigma associated with it that other long-term illnesses do not have.)