A Life In Math


"What a wee little bit of a person's life are his acts and his words! His real life is led in his head, and is known to none but himself... Biographies are but the clothes and buttons of the man. The biography of the man himself cannot be written."
-- Mark Twain quoted in "A Numerate Life" by John Allen Paulos


A blurb today on John Allen Paulos' latest book (released in paperback), which he terms a memoir, "A Numerate Life." I expect this will be the last book I'll review this year, and it will be added to my list of 10 favorites for the year to be posted soon.

The volume is slightly reminiscent of Martin Gardner's autobiography, "Undiluted Hocus Pocus," with a similar light, off-handed, sometimes rambly, often nostalgic style reflecting on scattered matters that Paulos either deems important or simply remembers fondly from his varied but math-centered life. It is relatively short (under 200 pgs.), a bit quirky, and somewhat informal... you can almost imagine Paulos, like your grandfather, in a big ol' Lazy-Boy chair relating his life and thoughts on a Sunday afternoon.

I think it definitely helps to have read previous of Paulos works and already have a sense of his perspective, to accurately take in the recountings and musings in this volume. The same was true of Gardner's book, which was probably most appreciated by those who already felt they knew Gardner somewhat. If you know nothing about Paulos, and pick up this book, it may come off as self-indulgent or overly introspective, including matters that could strike uninitiated readers as trivial (like a paragraph on the logical approach to leaving the toilet seat up or down), but that Paulos recognizes exemplify his consistent, rather empirical, approach to life; he is if nothing else, always the teacher/explicator/analyzer.

Then too, Paulos tosses in puns all along the way, and given the frequency with which I see mathematicians use puns, I now wonder if there is some sort of neuronal connection between math aptitude and pun prowess (or wordplay in general)... whoever researches this for their PhD. dissertation can thank me later for the suggestion ;-)

There are bits of mathematics sprinkled throughout the book as well, moreso in the second half than the first half. Paulos touches on all the topics he's addressed in prior works: education, probability, coincidence, the stock market, religion, in addition to math.  Anecdotes and reflections abound here... a summing up as it were, as Paulos enters his seventh decade. Segments about his family are especially touching, and Paulos has a quirky ability to float back-and-forth between nostalgia and human musing, followed by terse, mathematical analysis of the same.
You also get the sense of Paulos' frustration with "innumeracy" in America (a term he coined for math illiteracy), and the difficulty of a remedy for it. There is also a sort of "meta" quality to the content, as the author often comments on what autobiographies are and are not capable of accomplishing.

I enjoyed the second half of the volume more than the first half, so be aware that if the early pages don't grab you the best is yet to come. This is a sit-back-relax-and-enjoy sort of volume, perhaps opening a window on what a typical (if there is such a thing) life of a professional mathematician is like... in some ways not much different from any other person's life... except, well, more numerate. 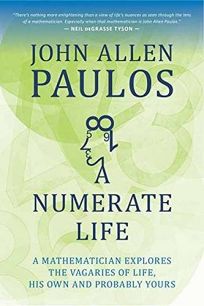