A Great Start to the Year (in books) 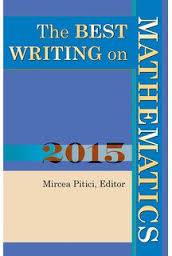 An overview of Mircea Pitici's latest annual "The Best Writing on Mathematics 2015."

First, I'll say this is probably (to me) the best volume in this series yet, with a higher number of 'heavy hitters' than in prior volumes; and as Pitici admits, a heavier "recreational" component than past efforts. It also includes two of my very favorite, perhaps lesser-known expositors, Scott Aaronson and Natalie Wolchover.

While I'd read some of these selections previously, most were new to me. It ought be pointed out that, because of publishing lag time, though it is called "Best Writing on Mathematics 2015" the selections are actually mostly from 2014. Thus, many excellent pieces from 2015 are missing here. Some prominent names absent from this collection, include: Brian Hayes, Erica Klarreich, Keith Devlin, Siobhan Roberts, Julie Rehmeyer, Jordan Ellenberg, Terry Tao... perhaps they'll be in the 2016 edition.
Many other recognizable popular writers are included in the volume: Steven Strogatz, Vi Hart, Arthur Benjamin, Dana Mackenzie, John Conway, Andrew Gelman, Colm Mulcahy, Eli Maor, and Maria Freiberger. And one piece is so completely focused on work by Tim Gowers, that he too could almost be viewed as a contributor.

Because of the emphasis on recreational-tinged pieces this particular volume may find a wider audience than past editions have. Early on Pitici writes:

But with that said, there are also pieces touching on philosophy, applied math, pure math, statistics, education, biology, and art -- a real assortment and diversity as is typical for Pitici (you might expect such range from an anthology with multiple editors, but it is more pleasantly surprising from a single editor). Pitici always confesses too that the collection is a very eclectic, personal endeavor -- a different editor would likely result in a very different volume.

The book is intended for both lay and professional readership. I'll note though that a certain level of math aptitude or familiarity is required for several of the selections -- these are not the sort of "everyman" readings that Strogatz's much-lauded series for the NY Times was... although Strogatz's own entry here (about that very NY Times series) is very much an "everyman" piece. Some readings will definitely require hard work/concentration on the part of the reader.

There are so many outstanding selections that I enjoyed I won't single any out (nor will I point to the couple of entries that left me scratching my head a bit, "...why was this included" ;-), but I will point to just a few that seemed different enough for special mention:

These were just some pieces that I'd not seen before, and that covered some unusual ground -- your own favorites, as with any anthology, will be governed by your own personal interests.

Worth noting, that the Introduction contains a lengthy list of noteworthy books, mostly from 2014, and at the book's end comes a long list of articles that were good, but didn't make the final cut for inclusion -- in short, this collection of 29 pieces can lead you to a lot of further reading.

Also in the Introduction, Pitici speaks a lot about "interpreting mathematics," and I sense that he feels his viewpoint (not fully expressed) is not necessarily mainstream. He hints at it here:

Though I've skimmed all the entries, I'm still working through the volume in greater detail. And I find myself treating it like a dessert tray!: after a day of perusing, sometimes mundane or commonplace math content, I reach for Pitici's volume at night and pick out one chapter as my 'dessert' for the day!

One interesting bit of synchronicity for me, was an entry toward the end of the volume about a Canadian scandal in their national lottery, discovered by a mathematician. I don't much follow lottery news, but a few weeks back I'd read about a scandal in the U.S. involving several state lotteries being rigged, and then came all the hoopla over the biggest Powerball payoff in history (scandal-free, and, surrounded by eager participants, I purchased a ticket for the first time ever myself), and then this Pitici pick -- just an odd confluence of news about a subject I hadn't previously paid much attention to.

Anyway, I'm just happy to see the 'Best of Math....' series continuing; thank you to Dr. Pitici and Princeton University Press for that. It's a nice start to a new year that already has some fantastic math reads on the way. And each year Pitici surprises me a bit (mostly in a good way) with his choices.


[On Friday, Alexander Bogomolny posted his own review of the volume -- as expected with an anthology, his take and focus is somewhat different from mine:
http://www.cut-the-knot.org/books/Reviews/Best2015.shtml ]