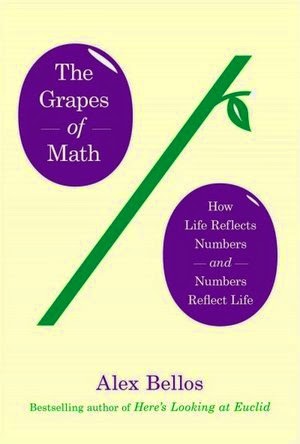 A blurb today on yet another fine new book for the math novice or enthusiast: "The Grapes of Math" by Alex Bellos (oddly, the title is the same as an earlier math book for youngsters by Greg Tang).
I very much enjoyed Bellos' prior work, "Here's Looking At Euclid," (American title). Publicity for Bellos' latest offering, however, appeared to focus on what seemed some trivial/light matters, and so I had lower expectations for this particular volume. The first five chapters were a bit disjointed and indeed mundane in some parts, but better than I was expecting, with a nice extended treatment of Benford's/Zipf's Laws in chapter 2.  (The timing of the book's U.S. release, coinciding with Jordan Ellenberg's new book, may also have caused it to suffer slightly by comparison)…  BUT after that first half, the book takes off on a scintillating ride (starting with chapter 6, on the number e, onward). Even though the topics covered are fairly standard fare for a general audience presentation, Bellos is a particularly sharp/clear explicator. He goes into more detail and explanation than many writers do, yet without being heavy-handed or tedious, moving along neither too fast, nor too slow, with a nice mix of illuminating topics.

My favorite chapter is chapter 7, covering negative numbers, i, Euler's identity, complex numbers, quaternions, octonions, and finishing up with iteration and the Mandelbrot Set. It's not that these are favorite topics of mine, but I love the way the chapter flows along, Bellos seamlessly moving from one kind of number to the next with good explanations.
Following chapter 7, come excellent, thoughtful chapters touching on calculus, self-reference, proof, the Bourbaki group (which is still active), and ending with a long, great treatment of Conway's Game of Life. As I say, I think the last 5 chapters of this volume are particularly instructive and wonderful, but depending on your inclinations, you will certainly find parts to enjoy in the first 5 chapters as well. And at the book's conclusion come 35 pages of worthwhile glossary/appendices/notes.
This will be a fine addition to anyone's general math bookshelf, or a great gift to a young mathematician-to-be.

I'll end with just one of the specific examples I especially enjoyed from the volume (and which I don't recall reading elsewhere)… it's a fun little bit of math/probability that Bellos got from this more extensive 2009 "Knowing When To Stop" article in American Scientist:

I'll summarize and paraphrase a little game, as follows (my words, not Bellos):

Player 1 writes down two different numbers on two slips of paper. They can be anything: 3, 22222222222, 14 billion, 1/17, .0375623524, whatever. Two different numbers I'll call x and y that are placed face down on a table. My goal as Player 2 is to try and pick the largest number of the two, by picking up one piece of paper, looking at it, and deciding whether I wish to stick with it as probably being the largest, or switch to the other (sight-unseen) slip of paper.
If I select a piece of paper and it reads, "1,008,465,243,195" I must decide if I think the remaining face-down paper is a lower or higher number. And probabilistically I have no way of knowing, so my chance of guessing right is 50/50 (this assumes no Bayesian factors that might actually be involved by playing the game with the same person repeated times).
BUT what Bellos informs us is that if you play the game repeatedly many times, then there is a strategy that assures that (probabilistically-speaking) you can win over 50% of the time (even if only slightly over 50%). The strategy is as follows: When Player 1 is committing his/her two numbers to slips of paper, you also choose a number in your head, call it "k" -- any number of your choosing, although it seems to me, selecting an integer at least larger than say 2, may be of some benefit. You simply remember the number; no need to write it down or say aloud what it is.

Now, once you turn over one slip of paper and see the number written thereupon, your rules (to do better than 50/50) are as follows:

1) IF your number k is LESS than the number turned over, then assume the turned-number is the highest of the two slips of paper (and stick with it), but

2) IF your number k is HIGHER than the number shown, then assume the remaining (facedown) slip has the higher number and pick it.

This system insures that over many trials you will win over 50% of the time. I'll quote Bellos' explanation of why:

"…consider the value of k with respect to the two numbers on the pieces of paper. There are three possibilities: (i) k is less than both of them, (ii) k is higher than both of them, or (iii) k is between them.
"In the first scenario, whatever number I see, I stick with it. My chance of being right is 50/50. In the second scenario, whatever number I see, I choose the other one. My chance is again 50/50. The interesting situation is the third one, when I win 100 percent of the time. If I see the lower number, I switch, and if I see the higher number, I stick with it. When my random number serendipitously falls in the middle of the two numbers you wrote on the pieces of paper, I will always win!"

Bellos goes into a little more detail about the problem, but the basic point is that given many repetitions of the game over time, the third scenario yields at least a slightly better than 50/50 winning outcome. Just one more interesting probability thought exercise.

Bellos' entertaining book is another fine addition to the growing list of volumes that can be enjoyed by math fans of various levels. Indeed, it does my heart good to walk into my local Barnes and Noble and find TWO math books gracing the 'recent bestsellers' table (Ellenberg and Bellos)! This seems like a paradise age we live in for math appreciation, for such to be the case (not to mention all the wonderful internet math resources continually available). May it continue.