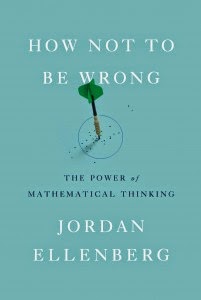 …Buy THIS book: "How Not To Be Wrong" by Jordan Ellenberg


"The lessons of mathematics are simple ones and there are no numbers in them: that there is structure in the world; that we can hope to understand some of it and not just gape at what our senses present to us; that our intuition is stronger with a formal exoskeleton than without one. And that mathematical certainty is one thing, the softer convictions we find attached to us in everyday life another, and we should keep track of the difference if we can."  -- Jordan Ellenberg


To see it on a bookshelf Jordan Ellenberg's new volume looks like a slim, modest read… but, in fact, it's a dense, almost 450-page, surprisingly rich, entertaining, and jaunty math volume. And I'll cut to the chase to say that even though the year is only half over, I won't be surprised if this turns out to be my FAVORITE math book for all of 2014! It will certainly be in the top 2 or 3.

The five parts of Ellenberg's book, are entitled:

You might infer from that, that it is a volume bent toward statistical, probabilistic, and 'big data' related topics. You'd be right. This is a math genre that has gained great currency in the last few years -- so much so that I'm a bit weary of reading popular (and somewhat redundant) treatments of these subjects. BUT... Ellenberg's text is amazingly fresh, current, and fun to read! So much so, that I initially wondered how much of the final product was Ellenberg's own voice, and how much possibly molded by an expert editor -- but Ellenberg has written a novel before and has a degree in creative writing… moreover, Cathy O'Neil (who wrote a great review of this book, and knows Ellenberg personally) assures us that the book "reads just like Jordan talks" -- so there you have it!

Having said all that, I'll caution that the book, while written for a general audience, does require some minimal interest in, and aptitude, for mathematical discussion if it is to be appreciated/enjoyed. I'll reiterate what I've said before that the only math book I've seen in recent years that I think can truly draw in the naive math-phobic or math-inept is Steven Strogatz's 2012 "The Joy of X." For anyone though who has 'graduated' from Strogatz's treatment, this is a great follow-up, and concentrated on very timely topics, while yet covering a surprising amount of ground.

Let me tell you just how fresh this book is: there is not one chapter, not one section, nor paragraph, or line or word about the Monty Hall problem! Don't get me wrong, I love the Monty Hall problem, and believe it is one of the most interesting, instructive math tales around, but it has become an obligatory, rite-of-passage entry into every popular math book around (especially any involving probability)… Ellenberg just skips it... and I think that's great!  In fact, even when Ellenberg touches upon subjects that are fairly routine in such volumes, he gives them his own engaging spin, his own re-creation, that makes them fresh again. It is a remarkable achievement in exposition. Coming across topics like Monty Hall in other books gives me a sort of yawning 'oh, here we go again' gut reaction… I NEVER had that response reading Ellenberg.

The very first example he uses in the book is a fascinating real-life one I was unfamiliar with, dealing with bullet holes in missing World War II planes: essentially, the question arose how to more efficiently aluminum-plate war-planes to resist being shot down -- too little plating and the planes were more vulnerable; too much and the added weight made them less fast and maneuverable. It was noted that returning planes had the most bullet holes in the fuselage and a smaller number in the engines… implying perhaps that the fuselage needed more protection… but NO, it took statistician Abraham Wald to deduce that the planes getting hit in the fuselage were actually able to return to base, and it was planes being hit in the engines that weren't even returning successfully (to be a part of the sample); i.e. it was the engine compartments that needed more shielding.
The book is full of such clever, sometimes counter-intuitive examples. And throughout, a major theme of Ellenberg's is that mathematics is not so much computation and mechanical procedures as it is the careful application of common sense to pattern and structure.

I'll just list some of the prominent popular subjects he touches upon through these pages:

-- the Laffer Curve (famous, laughable cornerstone of Reaganomics)
-- obesity research
-- prime numbers
-- "the Baltimore stockbroker" -- this is a famous tale (though I've never seen it given this name before) explaining a system for sending out 10 newsletters successfully predicting some stock market movement, and then (with your 100% batting ave.) sending out an 11th letter soliciting new customers for your prescient services.
-- a famous 2009 fMRI study of a dead salmon, that made the rounds (yes, a dead fish scanned by fMRI)
-- the "hot hand" notion in basketball
-- the "crisis" in scientific replication, and John Ioannidis' work
-- the "crappy algorithms" that are now part of business 'Big Data'
-- state lotteries
-- correlation vs. causation and the "slippery" slope between them
-- the nature of "genius" in mathematics
-- opinion polling and elections

And those are just some of the more interesting (popular) topics along the way, while in-between Ellenberg teaches a little calculus, statistics, Bayesian analysis, non-Euclidian geometry, game theory, and an excellent section on regression analysis (although this may also be, for many, the most boring or tedious part of the volume). Somehow Ellenberg manages to go into more depth than others often do, yet remain clear and not too technical. Also mixed in here, some reflective history as well, as Ellenberg relates how the "territoriality" of mathematics has expanded over time, from rather limited areas, to domains where it didn't even seem applicable at one time or another.

And beyond the more usual mathematicians, there is mention of a sundry cast of characters: Daniel Ellsberg, Thomas Picketty, B.F. Skinner, David Foster Wallace, Antonin Scalia, all make appearances in these pages.

Meanwhile, throughout, Ellenberg lobs in his droll humor along the way… rare (and wonderful) to find in a math book. For some reason the simple line that most cracked me up came when he was reporting on Bertrand Russell's famous communique to philosopher Gottlob Frege regarding the latter's magnum opus on math's logical foundations. Russell, almost casually, mentions a single paradox (now famously known as "Russell's Paradox") he has found in Frege's account of set theory , which essentially undid all Frege's hard work. Ellenberg writes, "Despite the respectful tone ('I have encountered a difficulty,' not 'Hi, I've just borked your life's work'), Frege understood at once what Russell's paradox meant for his version of set theory" -- something about even imagining the properly-British Lord Bertrand Russell writing, 'Hi, I've just borked your life's work,' sent me into a cascade of chuckles -- I'll just bet Ellenberg too formed a big Cheshire grin on his countenance when he wrote those words ;-) Anyway, there are many such grin-producing lines.

This book (and its author) is getting widespread coverage right now (#19 on one bestseller list), and sometimes when that happens there's a lot of hype and PR involved… in this instance it's all well-deserved. Cathy O'Neil writes of Jordan having "an infectious positivity," and that is indeed one of the unexpected benefits and appeals of this volume.
Just a splendid book (Fields Medalist Timothy Gowers says of it "destined to be a classic"), especially for the first time out-of-the-box… can't imagine what Jordan will do for an encore… or, if he even needs an encore after this bravura performance!